As we head back to the original Impact Marathon, CEO & Founder, Nick Kershaw, reflects on what made “Project Pipeline” such a successful Impact Project.

In 2016, we settled on our first location for the Impact Marathon Series - Kakani, Nepal.

Our goal had been to tell the story of Nepal, 18 months on from the destruction brought by the earthquake. Looking around the village of Kakani, we could see the corrugated iron shelters where once people had built their homes. We saw everyday life carrying on as before and the rebuilding slowly beginning. We figured that the Impact race would be looking at rebuilding homes.

However, we were cognizant that our goal may not have been the goal of the community. We sat down with the leaders and talked through what Impact offered as a platform for change. Despite our preconceptions, the community had one uniting project – they all wanted water. More specifically - a pipeline -  to bring water to the village all year round. The water source was 5km from the village water tank and the village is about 2km in radius. The community wanted to see water delivered to every single house, all year round.

But it wasn’t all smooth-sailing. There was one family that owned a hotel in town that had year round water supply. During the winter, as the pipes froze, and during the summer as the water source ran dry, the villagers would all walk there to collect and take their water back home. It was a matter of prestige that would be undermined by this ambitious project.

On the first ever morning, of the first ever Impact project 80 Impact Runners, and around 100 villagers got stuck into the digging. Organisation and delivery of the program had been entrusted to the villagers. With the natural language barriers, and different opinions on the most efficient use of man power, this led an utterly crazy first few hours. But momentum built (until 11am when all the Nepalis disappeared to take their Dal Bhat, the most important meal of the day, only to return and inform the Impact Runners we'd been digging in completely the wrong direction…there was subsequently a Dal Bhat rota put in place), and two days of work later only the last part of the pipeline was left to dig. A task subsequently delivered by the villagers over the coming weeks.

Behind the scenes, the one unhappy family had been making a lot of noise, voicing their concerns and stirring unrest. Despite this, the community leaders insisted we trust in them, trust in the community of the village. 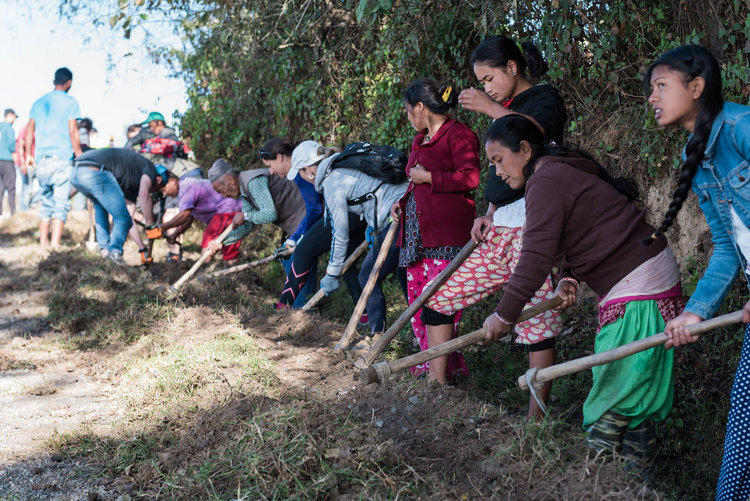 We returned to start the second stage of what had been dubbed “Project Pipeline”, finding water now filling the central 65,000L tank. This year’s mission: taking this water to all areas of the village. For two days, we dug. And this time, due to the roads in the village, we had to dig 70-90cm deep. This was easily the most brutal 2 days in Impact Project history; we are indebted to the incredible group of runners who relentlessly pushed to lay this pipeline. They dug through dirt, they dug through rock, they dug through tarmac and came out empowered on the other side. Because once you’ve spent 8 hours a day, for 2 days straight, digging through rock – you understand how to overcome limiting beliefs of can and cannot.

This year, we spent time at the hotel of the one unhappy family. We used it on our team recces (the only hotel with hot water, it was a pragmatic as well as altruistic decision) and we took the runners for tea on their rooftop during breaks in the digging. There was a mutually beneficial relationship building.

We headed up to the village on a recce a few months pre-race. There was an energy about the place; it was buzzing. It wasn't until one of our local leaders, Bishnu Moktan bounded over to us that we realised why. Looking around, the women were washing their pots outside their houses, the children were brushing their teeth, one chap was washing his buffalo next to his house. Bishnu took us on a tour of all the houses with their taps, all connected to a meter to ensure all contributed to maintenance cost. 81 families with their very own water supply. Everyone was chatty, excitable. They had used the Impact platform as a catalyst to achieve their goals as a community.  Everywhere, there was building work, new hotels, new restaurants. The water had powered the recovery and now each household had built their savings up to start investing in their businesses again.

On passing the hotel of our aforementioned family, seeing a new building going up, the head of the family came over, a huge smile on his face…

"Thank you, what you have done for this village is amazing, we are so grateful, thank you"

Change comes when we join together as one community. We will be heading for our 4th event there in just two months and the discussions on what our Impact Project will be are well underway for how our two communities will, once more, join together to create lasting change in Kakani.